Choir Workshops invite the participants to the world of sounds created by singing.

Nowadays it’s not very often that we have the occasion to meet and make music together. Choir Workshops make that possible for all the participants including ones who are not yet singing well nor are educated musically.

The program of Choir Workshops draws special attention to the creative potential of the participant, his work is to discover and awaken his hidden possibilities and talents, and develop them through singing in choir, music games, listening to carefully selected music movies and musicals, and participate in music improvisations “in live”.

The main objective of the program of Choir Workshops is to invite people to sing in a choir in the Grand Performance, and also in the artistic setting of a holy mass, where those concerts are open to the public.
Another important step of the workshops is an identification of the inborn music abilities, the level of those abilities and how much are they formed.
Workshops learns a cooperation that guides to a unitary and beautiful concord in two, three and four scales, that awaken musical creativity, that calm oneself inside, that makes one more sensible for the variety of colors of different voices and its individual sound.
Because the students are representing a very different level of music abilities it’s necessary to recognize de level of those abilities. It’s made in a form of individual interviews that represent the singing level of a person, it’s inborn music abilities, the sense of rhythm, intonation and hormonic hearing, the type of the color of the voice, its scale, and also it’s shows the vocal place in the choir.

The Workshops classes are very varied, so they empower with activity and creative ideas in participants, that they want to execute, they develop the music imagination and they make oneself more sessile to the beauty of music.
They propose as well physique movements, that became the favorite form of having fun and playing with the music, because they make it possible to spontaneously “take it all out” and brake free from the tensions in the body.

Making music together shapes the ability to cooperate in a group and to aim for the same objective, it exercises the sense of duty not only for myself but for all of us in the same voice (ex. soprano or alto voice)
While exercising on the Workshops the attention is also driven to observance of the right posture while singing, the positioning of the jaw, tongue, mouth, shoulders, and the training of the proper breathing, there are also exercises for the esthetic walking, sitting and holding up the notes.
There are taking place rhythmic schemas in the spatial system, plays and scenes with singing and playing percussion instruments.

Every participant is encouraged to create his own songs and making the accompaniment and improvisation to them. A very important educational aspect is making aware to the participants that with the voice one can express himself and his individuality, and participate in the society, while by listening is “adjusting” itself to the environment, where something is happening, music is an amazing esthetic stimulus that shapes the human into a mature, coherent personality.

In the Choir Workshops the participant is learning many interesting things associated with his voice. There are discussed various subjects like:
human voice as an instrument, the sound as an acoustic phenomenon, the characters of the sound, sound phenomenons, what is a sound intelligence, what music intelligence, what is clean, pure intonation, marking, how to master the wright voice vibration, what are transitional sounds, what is the voice coverage technique, voice registry, falsetto, what is the role of consonants and vowels in singing, what is a added breathing and support breathing.
We also educate about voice health problems and how to take care of the voice in the physiological and psychological sense; about the voice hygiene and the harm from screaming, straining and stressing out the voice.
We also draw attention to the benefits of the silence as a way to relax the exhausted auditory perception.

Choir Workshops infiltrate and complement the Instrumental Workshop and the Studio Techniques and Sound Recording Workshop, and the Individual Voice Emission.
Participants have the possibility of participate in all music workshops, that

As the summation we perform in the holy mass where we present the effects of our work in the Choir Workshops in the form of choir singing, group one (in the Workshops the most talented participants are working in smaller groups) and solo singing. 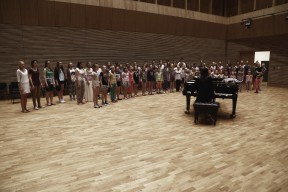 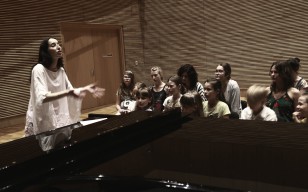 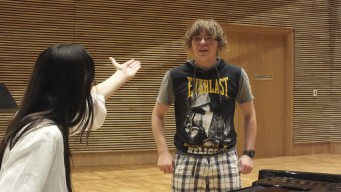 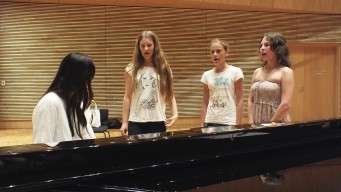 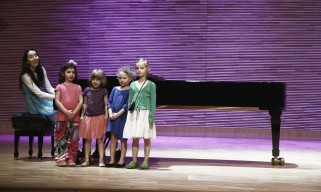